Built by Thomas Edison’s company in 1882, the Pearl Street Station was the world’s first combined heat and power (CHP) plant. It harnessed the heat emanating from its steam engines to warm nearby buildings. But it’s only recently that the practice of cogenerating heat and electricity has started to see widespread adoption.

Cogeneration is gaining fresh momentum because it saves money and alleviates the electricity demand on the grid. Worldwide, there are more than 15,500 GE Jenbacher gas engines powering CHP systems in 100-plus countries. For example, a 12-MW CHP system powered by four Jenbacher gas engines provides onsite power and heat at a 55-acre tomato greenhouse complex in Ontario. Operated by Great Northern Hydroponics, the system also produces a ready supply of CO2 to fertilize the facility’s tomato crop. Or take a beverage facility in the GTA, where a 2MW CHP system powered by one Jenbacher engine is currently being installed. The system will provide power for the plant as well as steam and hot water that will be used in their bottling process.

Many governments around the world have legislated incentives to improve the uptake of CHP technology, including Ontario, which covers up to 40% of the capital cost of an installation. Richard Laszlo, director of Research & Strategic Initiatives at Quality Urban Energy Systems of Tomorrow (QUEST), a non-profit organization that promotes smart energy communities in Canada, says the incentive can shave one to three years off a project’s expected payback time. “Ontario is showing real leadership on this,” Laszlo says. “It’s one of the things they have done with policy that makes a lot of sense.”

But favourable governmental policies are just one of the three big factors driving interest in CHP. Under Ontario’s Conservation First Framework, the government recognizes CHP projects as conservation measures, because they decrease demand from the grid. The government has set a conservation target of seven terawatt-hours over the next six years, a goal that local distribution companies say can only be achieved through increased use of cogeneration.

Another factor driving interest is that the “spark spread” is increasing. Spark spread is the difference between how much electricity costs from the grid and how much it costs companies to produce it themselves with natural gas. In other words, it can be cheaper for companies to produce more power behind the meter, although they still have to remain connected to the grid in Ontario to qualify for the government’s incentives.

A third major reason is that while there haven’t been huge leaps in terms of the basic technology behind CHP, it’s much simpler to install now because CHP manufacturers have made it more modular, almost like “plug and play,” Laszlo says. “The packaging is much easier.”

For a full explanation of how cogeneration works, check out GE’s infographic.

When you consider these three elements together—conservation benefits, energy efficiency, and ease of use—it’s clear why CHP is gaining interest among customers and industry players alike. For instance, GE hosted an event on October 6 at The One Eighty in Toronto’s Manulife Centre to highlight the changes and opportunities for onsite power. Another initiative, Bright Green Cities, has GE partnering with Sustainable Development Capital LLP, to provide “an integrated turnkey solution to develop and invest in CHP technology for commercial and industrial customers with no upfront capital cost,” says David Maxwell, managing director of SDCL.

Maxwell says the most significant barriers to CHP adoption have included a lack of available funds, as well as a scarcity of commercial and technical expertise. To overcome these obstacles, Bright Green Cities takes on both the construction and operational risks and responsibilities of a CHP project. Also, the company’s contingent service charge structure offers energy (both electrical and thermal) to clients at a significant discount to the grid, as well as prices that are fixed and predictable.

CHP works best at facilities with a consistent heating or cooling load, but for those without, there are still attractive onsite power options. In Ontario, the Industrial Conservation Initiative (ICI) offers a strong incentive to large electricity consumers who reduce their electricity consumption during peak times. Those who participate can reduce their electricity bill by up 50%. For now, this initiative is restricted to customers with a monthly peak demand greater than 3000 kW, but recently, Ontario has proposed expanding the incentive to include customers greater than 1000 kW. Through a combination of software and onsite power, GE is helping customers reduce their peak load and achieve these outcomes.

This story was provided by Pressboard for commercial purposes. 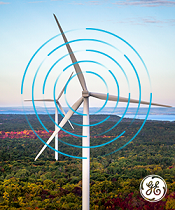 GE Reports brings Canadians the innovation insights they need to navigate our increasingly digital world. We cover everything from the latest clean-tech advances to leading-edge energy-sector solutions. Looking for answers – and inspiration? GE Reports offers up both.