The purpose of this section is to introduce governance innovations that can facilitate collaborative implementation of renewable energy systems (and other aspects of community energy plans). Specifically, we shed light on ‘intermediaries’: i.e., organizations that institutionalize local collaborations, and serve to catalyze and coordinate the implementation of community energy plans. In this section, we will:

Articulate the significance of intermediaries to community energy planning

Assess the strengths, weaknesses, opportunities, and threats associated with this governance approach based on a review of literature and insights from key informants involved with local intermediaries operating in select Canadian communities

In the end, we hope to have equipped you with baseline knowledge necessary to assess whether an intermediary might be the right fit for your community.

The barriers to renewable energy (RE) technology implementation and diffusion are systemic. Even as RE systems have become cost-competitive with conventional energy systems, and as flows of capital investment are poised to drive RE implementation, their deployment is inhibited by entrenched preferences for conventional modes of energy generation and distribution within prevailing regulatory systems, utility business models, and energy markets. These entrenched preferences and interests are not always obvious or deliberate in their intent to inhibit the deployment of RE. Systems are lazy, and they will not change on their own. They require a vigilant effort to identify and address the ways in which they inhibit deployment of RE at scale.

Intermediary organizations are a governance innovation through which this vigilance can be achieved at a local level. Intermediary organizations serve as a network manager, a catalyst, and a boundary crosser. Their purpose is to break down silos and systemic barriers by brokering relationships across implementation partners to drive community projects and programs. Our focus here is on intermediary organizations with a direct line into municipal government, and a direct mandate to catalyze the implementation of a community energy plan (CEP). As a corollary, the municipality is positioned as a partner, rather than the primary implementer, of a CEP. This is not a new proposition for community energy planners. The spirit and intention of CEPs have always envisioned such a role for the municipality. The suggestion to develop an intermediary organization is simply a proposal to structure and institutionalize this role. In many ways, establishing an intermediary is a classic form of corporate innovation: where a corporation (municipality) sets an objective that overwhelms internal capacity and extends beyond the sphere of direct influence (e.g., climate emergency declarations or net-zero carbon targets), that corporation must find ways to mobilize external resources to support those objectives. An intermediary is just such an innovation.

There are two underlying assumptions here, about the role of the municipality in CEP implementation. First, that the mentality of municipal staff shifts from an ‘inside-out’ approach to an ‘outside-in’ approach. Municipalities must work to align themselves with implementation partners first, and then organize internally. When the municipality sees itself as the implementer of CEPs, the opposite tends to be true: municipalities organize internally, and then align themselves externally. This inside-out approach can foreclose or delay collaborative solutions. The second assumption is that the problem statement shifts from ‘technology and finance’ to ‘institutional capacity and collective action’. Seen in this light, the municipality focuses on expanding capacity by mobilizing collective action, rather than starting with concerns about which technology will be pursued and whether it can be justified in their capital budget. This view is important, certainly: we are simply proposing that it is not the starting point.

Intermediaries are in some ways similar to municipal service corporations and public-private partnerships, in that these are all governance innovations required to accelerate implementation of renewable energy. Unlike municipal service corporations and many public-private partnerships, however, intermediaries are (in theory) not meant to deliver services or products. They are meant to sit between organizations that do; to serve as a backbone for collaborations across government, NGOs, businesses, and the public. In Canada, intermediaries have taken two forms:

To date, very few intermediaries are operating in a community energy context. There is, however, an extensive literature on intermediaries working in other domains (e.g., homelessness; poverty reduction). We review that literature here, supplemented by insights from interviews with key informants who have experience with intermediaries across select Canadian communities. We use a Strengths, Weaknesses, Opportunities, Threats (SWOT) approach, described in the figure below, as a way to draw out insights from experiences. Ultimately, more research is needed on specific design features and outcomes to understand the efficacy of these governance innovations. 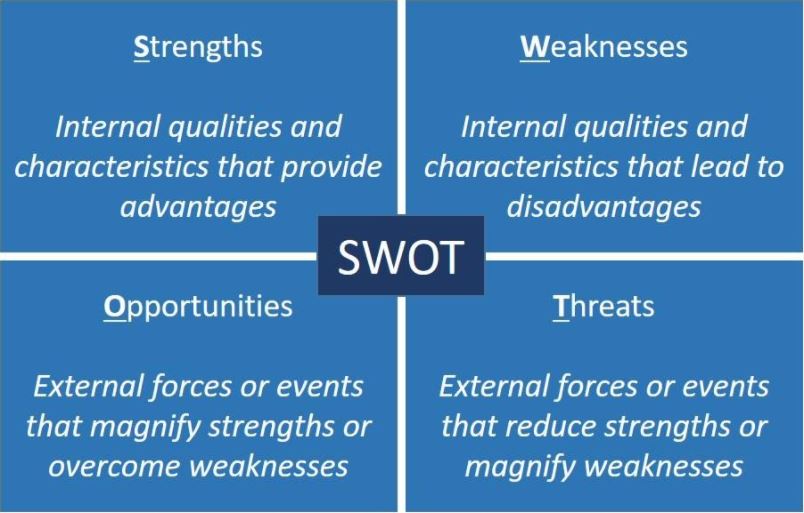 Technological innovations need to be met with social innovations. Establishing an intermediary is increasingly seen as a crucial social innovation through which to accelerate the implementation of renewable energy, and of community energy plans more broadly. In all cases, intermediaries move at the “speed of trust”, which is to say slowly and only through predictable commitment and cultivation of relationships. For more information on this idea, consult the resources below.

GO BACK TO THE HOMEPAGE